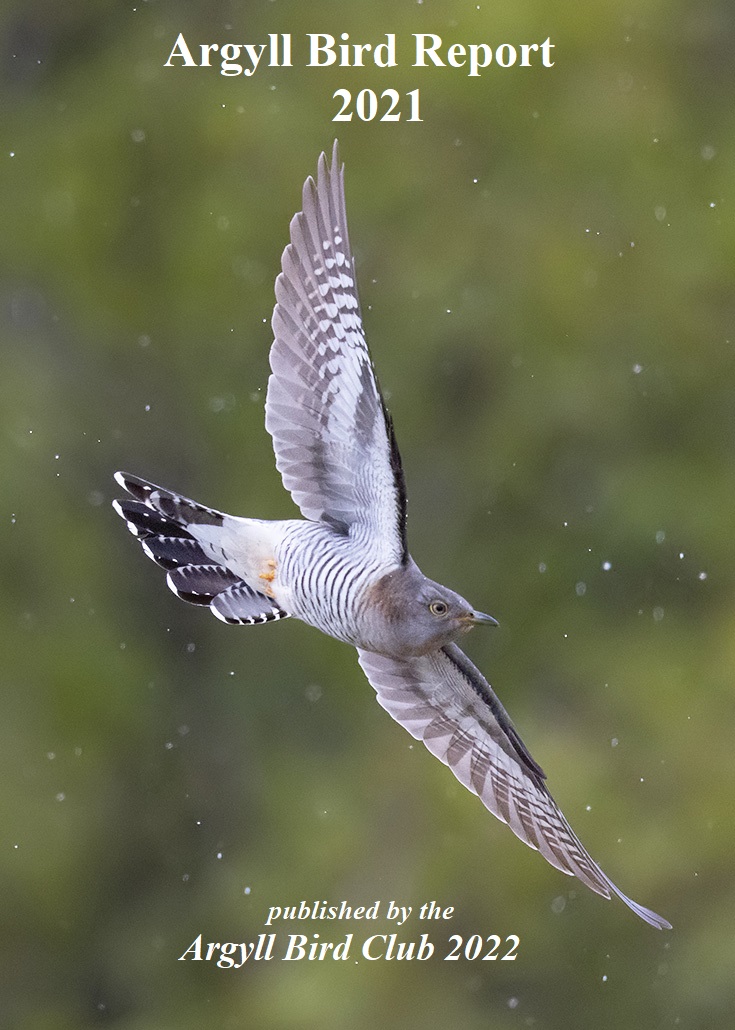 AVIAN INFLUENZA (BIRD FLU) – FURTHER INFORMATION ON THE LINKS BELOW

ISLAY: Female-type SURF SCOTER showing well on Loch Indaal, Islay with a small group of Common Scoters off Blackrock viewed from the Sunderland Memorial by A847 at 11:15 (Jonathan Farooqi).

MID-ARGYLL: A WAXWING in Kilmartin this morning was a good find and new garden species for Frank Cavannagh.

KINTYRE: The Richardson’s CACKLING/TODD’S CANADA GOOSE duo were opposite the Campbeltown Airport terminal building this afternoon and a Snow Bunting in the hills above Tayinloan (Tom Lowe).

TIREE: A drake GREEN-WINGED TEAL was at Loch Bhasapol this afternoon and 7 (inc 5 juvs) EUROPEAN WHITEFRONTED GEESE were at Balephuil. Also a juv GLAUCOUS GULL at Loch a’ Phuill (John Bowler).

MID-ARGYLL: A juvenile SPOTTED SANDPIPER was found at Clachan, Seil Island around midday (Jack Waldie). Only the fifth record for Argyll if accepted by the BBRC.

MULL: The YELLOW-BROWED WARBLER at Craignure is still present, seen at midday (Chris Austick, Nancy Somerville).
KINTYRE: A TODD’S CANADA GOOSE and a CACKLING GOOSE were in a field at Kilmichael, N of Campbeltown along with Greenland White-fronted and Greylag geese (Tom Lowe).

MULL: A ‘SIBERIAN’ CHIFFCHAFF was in a garden at Dervaig today (Pete Walkden, Ewan Miles).

ARGYLL: Not a full invasion however a trickle of WAXWING sightings with single birds reported from Tarbert, Kintyre on 16/11, Fionnphort, Mull on 20/11, Port Charlotte, Islay on 20/11 and two sites at Carradale, Kintyre on 23 & 24/11.
COWAL: A fem/imm GARGANEY was at the Holy Loch on 19 Nov (Alex Ash).

KINTYRE: Interesting reports from Neil Brown of MAGPIE sightings from four separate areas of 5 birds today from Southend to Carradale.

ISLAY: A report of a COMMON/PALLID SWIFT over Port Wemyss – seen for a minute or so then flew off south (S Graham per Islay Whatsapp group).

MID-ARGYLL/KINTYRE: A WAXWING flew over into a private forest area (per Birdguides).

ISLAY: A LEACH’S PETREL and a juv POMARINE SKUA both seen from the Kennacraig to Islay ferry just before 3pm (Mark Lewis).

TIREE: A juvenile ROSE-COLOURED STARLING was with a group on Common Starlings at Vaul seaside area this morning (Jim Dickson).
KINTYRE: A f/imm BLACK REDSTART was found near the ferry slip at Tarbert (Mark Lewis).

ISLAY: A juvenile PALLID HARRIER was found by Neil McMahon and his group this afternoon – first at Machir Bay and again later at Sanaigmore. Only the third record for Argyll if accepted by the BBRC.
MID-ARGYLL: The male RING-NECKED DUCK from Loch nan Druimean has now moved to Loch Scammadale (Jack Waldie).

MID-ARGYLL: A male RING-NECKED DUCK with the usual Tufties at Loch nan Druimnean, S of Oban (David Jardine). A good find away from Islay & Tiree.

MULL: A probable PALLID SWIFT was reported at Fionnphort at 15.20 hrs, but ID not confirmed (Andrew Painting). Also, a COMMON/PALLID SWIFT was seen overhead at Kilchoan on Thurs 27 Oct (Ewan Miles) and the HOOPOE still present at Croig until 29 Oct at least.

ISLAY: A juv/1cy COMMON ROSEFINCH was in a garden on west side of Loch Gruinart  at lunchtime (James How).
MULL: The HOOPOE at Croig has been seen again today. Last noted on 20th Oct.

TIREE: The FIRECREST & ‘Siberian’ LESSER WHITETHROAT are still at Balephuil – also 3 Blackcaps there & a further 3 Blackcaps around the island. Also, a Snow Bunting at Sandaig & a Ruff at Barrapol.

TIREE: A FIRECREST was new in at the garden in Balephuil this afternoon. The ‘Siberian’ LESSER WHITETHROAT is still present, also 2 Blackcaps & 3 Goldcrest (Jim Dickson).
KINTYRE: A COMMON/PALLID SWIFT was seen briefly over Lephenstrath at 15.30 today (Ann Hand).
ISLAY: A GREY PHALAROPE was at Loch Gruinart today (Judith Hooper).

ISLAY: A GREY PHALAROPE was found dead at Currie Sands, Portnahaven today (Mary Redman).
MULL: A HOOPOE was at Croig from 16- 18 Oct (Mike Hardaker).
RED KITES – a big record (by Argyll standards) influx was witnessed today with 5 together over Loch Frisa, Mull and 10 together over Tayinloan area, Kintyre

TIREE: A YELLOW-BROWED WARBLER was new in at Balephuil today along with migrant Siskins (John Bowler).
KINTYRE: A juv MEDITERRANEAN GULL flew over the goose fields at Rhunahaorine today (Tom Lowe).

MULL: A GREY PHALAROPE was seen from the Colonsay to Oban ferry – towards Mull (Frank Cavanagh)

TIREE: Juv PECTORAL SANDPIPER again at Loch a’ Phuill.
COLL: A LONG-TAILED SKUA (age not given) was reported from the Oban – Tiree ferry off Coll early afternoon (per Birdguides).
ISLAY: A small type CANADA (Cackling?) GOOSE was reported at Bridgend today in with c 1600 Barnacle Geese (Mark Newell).

TIREE: A juvenile AMERICAN GOLDEN PLOVER – presumably a new individual was found at Barrapol today (John Bowler).
ISLAY: A report of a TURTLE DOVE in the Loch Gorm area today (per Islay WhatsApp).