Please report sightings you have of spring migrant arrivals to Jim at the email above.

A table for the migrants reported so far (please click): ARGYLL SPRING MIGRANTS 12.06.2021 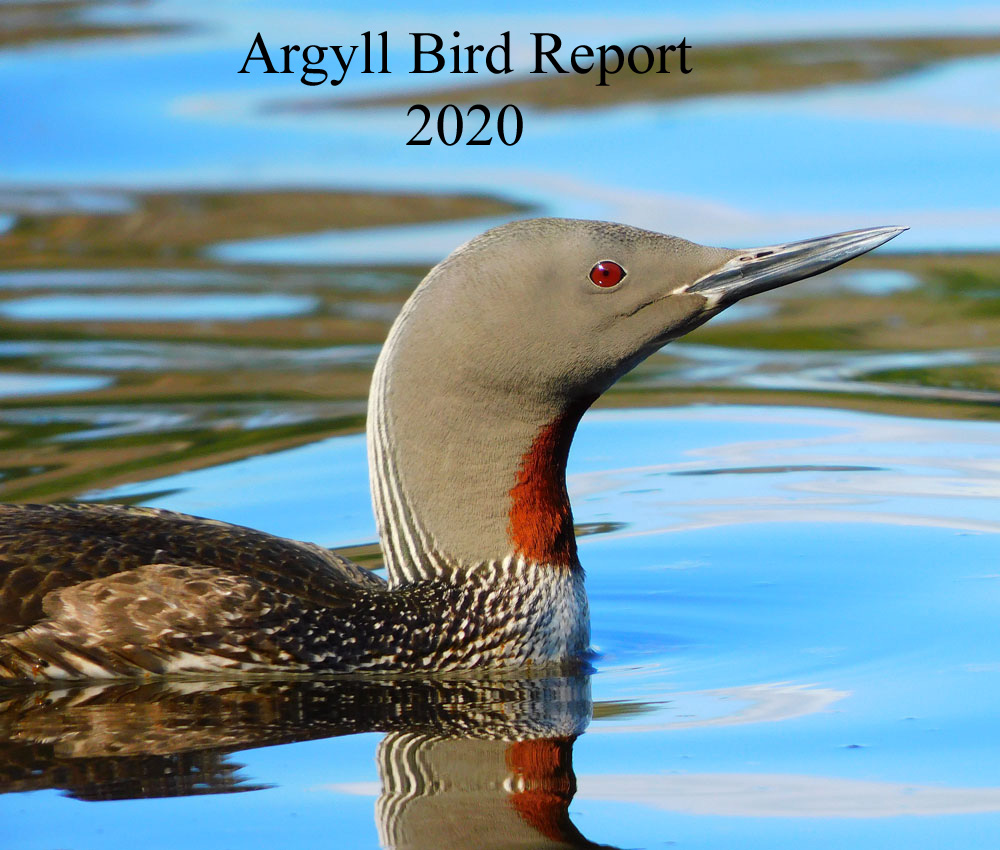 MID-ARGYLL: A juvenile MEDITERRANEAN GULL was off the south side of Ardrishaig this pm (Andrew Russell).

MULL: A SOOTY SHEARWATER was seen with a group of Manx Shearwaters off NW Mull (Andy Tate et al).

MID-ARGYLL: An adult MEDITERRANEAN GULL was in with the Black-headed Gull flock at the Add Estuary this morning – during the ABC trip there (Jim Dickson).

KINTYRE: A report of a ROSY STARLING in Machrihanish this afternoon (Murdo McDonald).
AT SEA: An adult intermedius LESSER BLACK BACKED GULL was 19km north of Tiree / 17.5km northwest of Coll on 17th July 2021, seen on/around RV Celtic Explorer – Irish state research vessel (Niall Keogh). This Scandinavian sub-species has occasionally been reported in Argyll and always good to receive excellent photos to confirm as in this case.

TIREE: A ROSY STARLING at Caoles today – presumably the same bird that was near Miodar last week (John Bowler).

ISLAY: Two ROSY STARLINGS have been around gardens at Conisby since 24 Jun (Gill & Alec Chasemore et al).
JURA: A report of a ROSY STARLING at Jura care centre, Craighouse today – however no supporting details as yet.
TIREE: Adult LITTLE STINT at Crossapol Bay (John Bowler) and an adult CURLEW SANDPIPER at Miodar (Gavin Chambers).

MID-ARGYLL: A HAWFINCH in a garden at Kames, Loch Melfort today (Maggi Reyner per Mike Pennington).

ISLAY: Another ROSY STARLING in Argyll making around ten or more reports in total – at Ardnave Point this morning (per Birdguides).

ISLAY: A SPOTTED CRAKE was heard calling in the early hours of today in the Gartmain area (David Dinsley).

ISLAY: A TURTLE DOVE was in Port Ellen today (per David Dinsley).
MID-ARGYLL: A report of a ROSY STARLING in Ardrishaig however no further details.
MULL: A ROSY STARLING was in a garden at Bunessan today (Tony Jefree).

MULL: An adult ROSY STARLING was reported at the north end of Iona today (per Birdguides).

TIREE: A QUAIL was at Balephuil yesterday afternoon and again this morning (John Bowler).
COLONSAY: A GREEN SANDPIPER was at Baleromindhu today (David Jardine).

TIREE: A pair of SMEW were found on Loch Riaghain today – first Argyll record since 2012 and first on Tiree for over 100 years! (John Bowler).
COLL: A BLYTH’S REED WARBLER in song today (Greg Smith).

ISLAY: A male GARGANEY this evening at the south hide RSPB Loch Gruinart (James How).
JURA: A drake MANDARIN was found at Craighouse on 17th May (Colin Bayfield) and a first report for the island.
TIREE: A pair of RED-BILLED CHOUGH were seen on the island just prior to 21st May (exact date still unknown) – (Jane Clark per David Jardine).

MID-ARGYLL: A GREAT REED WARBLER heard giving a burst of song in scrub by the graveyard behind The Tree Shop, Cairndow at 9.20 am – seen a couple of times briefly – a Song Thrush sized reed warbler type bird (obviously larger than Blackcap there), plain brown above and pale below and a white supercillium (Hugh Nicol). Area checked between 13.30 and 15.00 but no sign of it (Jim Dickson).

TIREE: A GULL-BILLED TERN was at Loch a’ Phuill – dip-feeding but mobile and headed off north-east (earlier seen around a gull colony at Balinoe at 16:15).
MULL: A MARSH HARRIER was seen near Griburn today (Steve Fryday per Anand Prasad).

MID-ARGYLL: A flock of c 16 white-phase SNOW GEESE appeared from the NW and flew over Lochgilphead/Loch Gilp and carried on south down Loch Fyne around 2.15 pm (Lynsey Gibson). This ties in with 21 Snow Geese on Lewis yesterday and reports of flocks elsewhere in the UK now. These are presumed to be feral birds from sites in England rather than wild transatlantic vagrants.

A belated report of a WESTERN CATTLE EGRET has been received by Janet & David Jardine from James MacLellan at West Drimvore. Video was taken of an egret there on 22 Oct 2020 and has only now been confirmed as this species – a first record for mainland Argyll, however 3-4 previous reports in total from Islay/Mull & Tiree.

MULL: The COMMON CRANE was still present in NW Mull however seen flying off from Quinish.
NORTH ARGYLL: A report of a single WOOD SANDPPER today.

COWAL: A report of what appears to be a male GOSHAWK high over Innellan today (per Katie Flynn).

MULL: A COMMON CRANE was seen flying over Treshnish farm NM Mull around 1 pm (Anand Prasad).
ISLAY: A drake GARGANEY was at RSPB Loch Gruinart this afternoon (James How).

MULL: A report of a HOBBY near the Ulva Ferry turn-off this morning (Michael and Rosemary Knight) – further details/description required.