Mid-Argyll is the central mainland area of the county, bounded by the A85 to the north, Loch Fyne to the east and West Loch Tarbert to the south. For bird recording purposes it includes the islands of Kerrera, Seil, Luing, Scarba and the Garvellachs. Much of the area is cloaked in commercial conifer forest but there are a few relict broadleaved woodland areas, dominated by oak and birch. Taynish NNR with its populations of characteristic birds such as Tree Pipit, Common Redstart and Wood Warbler is a classic example of the latter. The central part of Mid-Argyll has some open moorland areas, dotted with larger lochs and many small lochans. These hold breeding Red-throated Divers and a few pairs of Black-throated Divers as well as Little Grebes and Teal. Loch Awe is the largest of the freshwater lochs and has breeding Ospreys and divers in summer and small numbers of Tufted Ducks, Pochards and Common Goldeneyes in winter. Moine Mhor is almost unique as one of the last wild raised bogs in Britain. It is good for Common Stonechats and for Hen Harriers and wildfowl in winter. A wide variety of passage waders can be found at nearby Loch Crinan in spring and autumn. The west coast is broken by a series of moderate sized sea lochs. Some of these have small colonies of terns in summer, while Whooper Swans pass through in autumn and good numbers of sea ducks like Common Goldeneye and Red-breasted Merganser occur in winter. These lochs have also been hot spots for the rarer gulls in recent years. Off-shore islands like Scarba and the Garvellachs hold significant sea-bird colonies but are often rather inaccessible. Fortunately local operators run boat excursions from places like Craobh Haven and Seil which visit a good many of them. 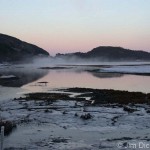 Habitat: Island at end of Loch Sween connected to manland by causeway. 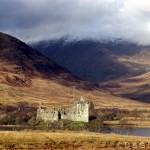 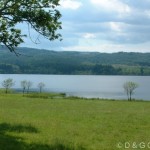 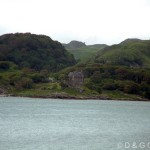 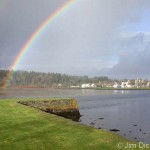 Habitat: Sea loch at the mouth of Loch Sween. 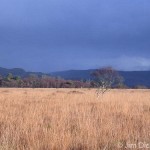 Habitat: One of the last wild raised bogs in Britain. 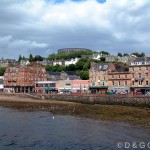 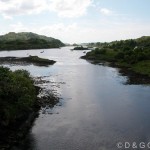