Kintyre forms the southern part of mainland Argyll and, at 68km long and 16km wide, it is the longest peninsula in Scotland. It is &lsquo;joined&rsquo; to the mainland at the isthmus of Tarbert and lies between the Firth of Clyde and the Atlantic. The long and varied coastline has numerous rocky shores and sandy beaches, including the Sound of Gigha which, outside the breeding season, hosts significant numbers of Great Northern Divers and Slavonian Grebes, good numbers of Eiders, Red-breasted Mergansers, Common Scoters, auks and smaller numbers of Black and Red-throated Divers, Long-tailed Ducks, Goldeneyes, and Velvet Scoters. Hills and moorland, which are now largely covered in commercial conifer forest, occupy the central spine haunted by Golden Eagles, Hen Harriers, Peregrines,&nbsp; Black Grouse and Ravens, with Short-eared Owl, Merlin and Red Grouse also present but less frequent. The conifers hold good populations of Crossbills, Sparrowhawks and Tawny Owls.

The sheltered eastern side rises more steeply and has a diverse landscape of wooded glens (including remnants of ancient oak woods) and farmland with Great Spotted Woodpeckers, Tree Pipits, Common Redstarts, Blackcaps, Garden and Wood Warblers. Kilbrannan Sound (between Kintyre and&nbsp; Arran) from Skipness to Claonaig is good for Black-throated and Great Northern Divers from autumn to spring. The windswept Atlantic seaboard has a more exposed grassland habitat and, along with the improved grazing at the Laggan, between Campbeltown and Machrihanish, holds large numbers of wintering geese, particularly Greenland White-fronted. To the south lie the dramatic cliffs, moorland and forest of the Mull of Kintyre with breeding Golden Eagles and Peregrines, with the lighthouse area attracting good numbers of migrant thrushes, Robins and warblers, and the chance of a rarity being seen.

The mouth of Campbeltown Loch is attractive to many species of duck and wader in winter and even greater variety during migration with Black-tailed Godwit, Curlew Sandpiper, Little Stint and rarities being recorded. In the autumn, seabird passage at Machrihanish Seabird Observatory can be spectacular with large movements of Manx Shearwater, auks, Kittiwake and Gannet and regular sightings of Sooty Shearwater, Leach&rsquo;s Petrel, Sabine’s Gull and many more. King Eiders have been sighted along the western coast of Kintyre several times in recent years. 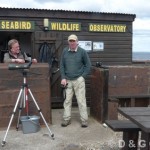 Habitat: Coastal viewpoint overlooking the north end of the Sound of Gigha and the mouth of West Loch Tarbert.

Habitat: Group of islands off the south coast of Kintyre with bird observatory and important sea-bird colonies. 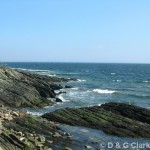 Habitat: Sand and shingle bay looking across to Arran with woodland behind.

Habitat: Stretch of sea between Kintyre and Isle of Gigha including sandy headland at Rhunahaorine Point (NR6949).

Habitat: Sandy beach with meadowland behind and ferry terminal for Gigha. 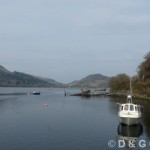