2020 turned out to be a year unlike any we have known. In autumn 2019, following the excellent talk given by Annette Anderton at the indoor meeting, the ABC committee agreed that it should try to find out more about them in Argyll and undertake a survey of Swifts in 2020. Little did we know how suitable a choice this would be during the lockdown brought on by the Coronavirus pandemic.

BTO Surveys have found that Swift numbers have dropped by around 50% since 1995 and ringing has shown that some can live to 18 years of age or more. They are a remarkable species, flying for nine months or more without ever landing from when they depart Argyll in late July and August until they return in the first half of May. They even mate on the wing and can make long-distance foraging trips during the breeding season of over 100 miles. Factors that are known to influence their breeding success are those which impact on insect availability and feeding such as poor weather. Rain and also very hot weather, which can cause young to expire have been noted as a problem for Swifts, although the latter may be less of an issue in Argyll.

As virtually all Swifts nest in buildings (a few nest in woodpecker holes in ancient trees in the Native Pinewoods), they are one of very few species which are closely connected with people and where they live. The Club therefore decided to go ahead with the survey asking everybody to respect the government lockdown guidelines, but to report what they found in their local areas during exercise or in their own homes in some cases.

The project was advertised to members through emails and to the wider Argyll public through social media and the printed press. Following the initial information, updates were provided regularly. The effect of each update was to generate further reports, so overall good coverage was achieved for Argyll, and some areas just outside the boundary of our recording area. A very good response was received with over 40 people taking part.

Nationally it has been found that generally houses built after around 1965 don’t have breeding Swifts and, in Britain at least, the availability of nest sites can be a limiting factor. Where nest sites were reported in Argyll they were found to be breeding in old buildings or in nest boxes (such as those provided by Annette Anderton and in Taynuilt). Swifts readily take to boxes and the Argyll Bird Club has funded ten boxes, which were made available to members who were able to find a suitable site.

The first birds were seen back on 5 May in four locations (Campbeltown, Connel, Kilmichael Glassary and Oban) and were seen in Taynuilt the following day. However, immediately after their arrival the weather turned much colder, with severe night frosts in some locations, and fewer were seen for a while, with the main arrival occurring in mid-May.

The total breeding population in Argyll appears to be around 50 pairs in at least 19 locations. Breeding was noted at: 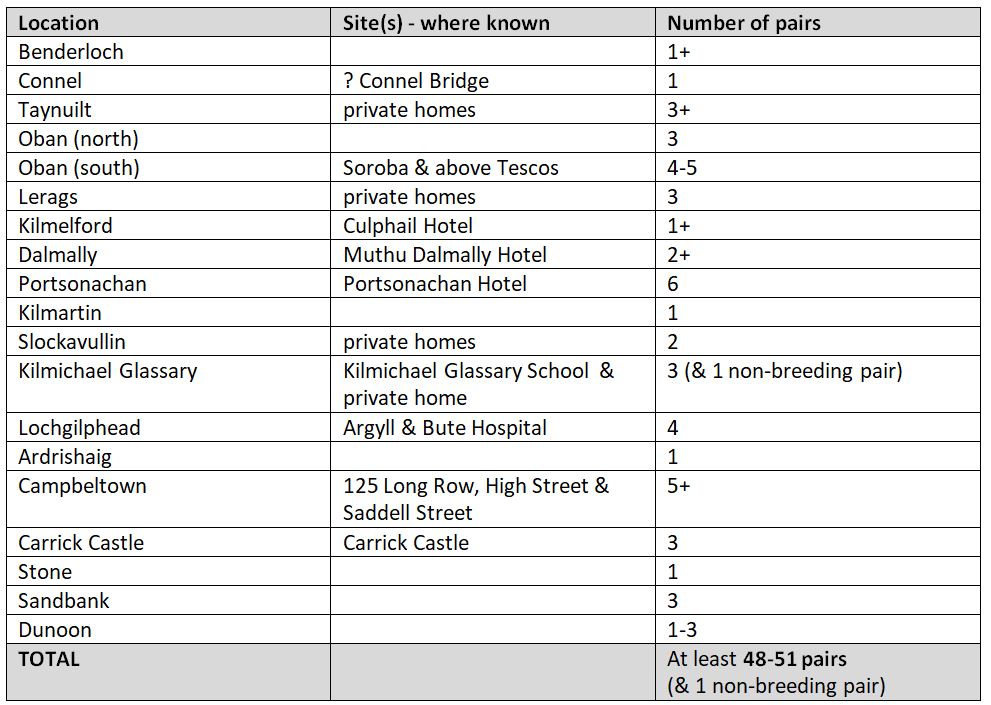 Notably no breeding was reported from Inveraray or Tarbert; any details of breeding from these locations or other sites would still be welcome. Additionally, birds were seen, but breeding was not confirmed in Dervaig and Salen on Mull, Scammadale Glen, Inverneil and Innellan.

Annette Anderton has been studying the Swifts in Kilmichael Glassary for a number of years, ever since the birds started breeding in her house when they were excluded from a nearby building. In 2020, two pairs bred at her house, and another young pair were ‘prospecting’; in Swifts younger birds occupy nest sites, but don’t actually breed until they are older at the age of 3 – 4 years. There was also a further pair nesting in the village.

With the added details from a camera installed in one of the nest boxes, Annette reports that two eggs were laid (the normal clutch size in Swifts) and that one of the juvenile Swifts fledged in the first week of August and the other in the second week of the month. Annette reports that on very wet days the birds just remain in their boxes, thus influencing the growth rate of the young.

Departure this year was particularly protracted at Kilmichael Glassary this year (details of the comings and goings of Annette Anderton’s birds are given here ). There was also a number of other late sightings reported. One was seen coming in off the sea at Balnahard Bay, Colonsay on 3 September and another was seen in Machrihanish on 22 October. Sadly a bird which had been dead for 2-3 days was found in a garden in Ardrishaig on 23 October.