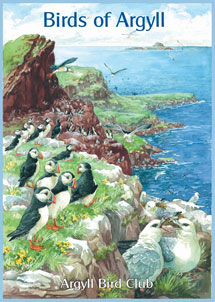 The history, status and distribution of birds in Argyll are described in this new book published in December 2007. This is a landmark publication for the Argyll Bird Club. The only previous avifauna of the region (Harvie-Brown, J. A. & Buckley, T. E. 1892. A Vertebrate Fauna of Argyll and the Inner Hebrides. Edinburgh: David Douglas) was published more than 100 years ago, so an update was well overdue.