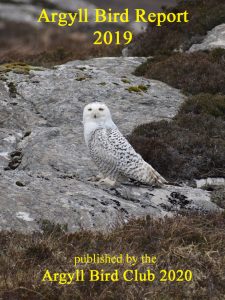 MID-ARGYLL: A dead Swift was found in an Ardrishaig garden today – specific identity to be confirmed but thought to be a COMMON? (Alan Dykes).
KINTYRE: A Swift was seen at Machrihanish on 22nd Oct (Caroline & Bill Anderson) – identity not confirmed as to COMMON or PALLID.
ISLAY: The HOOPOE in the Bridgend area is still being seen.. The WOOD SANDPIPER is still present at Gruinart and recent reports of both CACKLING and TODD’S CANADA GEESE.

The Argyll total of YELLOW-BROWED WARBLERS this autumn currently stands at 33 birds. Please get in touch if you have reports not already submitted – many thanks.

ISLAY: Adult ROSY STARLING in Bowmore today (per Ian Brooke) – presumably the same bird that has been seen there on and off since 18th June. A CACKLING GOOSE was noted at Grainel today (Steve Percival).
COWAL: An Argyll record site count of 8 LITTLE EGRETS at the Holy Loch today (George Newall, Alistair McGregor). N.b. At least another 6 birds elsewhere in Argyll.
TIREE: Three YELLOW-BROWED WARBLERS and a ‘Siberian’ CHIFFCHAFF at Balephuil today. Also record numbers of Blue Tits recently with up to 6 birds at Balephuil (John Bowler).

ISLAY: A CURLEW SANDPIPER was at Gruinart flats this morning (Peter Roberts) and reports of 1-2 CACKLING GEESE – Gruinart/Ballinaby recently.

TIREE: A DUSKY WARBLER was at Balephuil today, skulking but very vocal – a new species for Argyll if accepted by the SBRC (John Bowler).

COWAL: a juvenile MARSH HARRIER in flight today at Auchalick Bay, mobbed by crows (Allister Hamilton).
TIREE: The 1cy RING-NECKED DUCK was seen better today and now sexed as a male, therefore an additional bird to the 1cy female last week at Loch a’ Phuill. Also a record count for Tiree of 4 Coal Tits at The Glebe (David Jardine).
MULL: A report of a RED KITE opposite the Salen hotel today (Jan & Peter Daisy).

A total of 27 YELLOW-BROWED WARBLERS have been seen across Argyll so far this autumn since 27th Sep.
TIREE: 1CY fem RING-NECKED DUCK now at Loch Bhasapol (David Jardine). 3 Chiffchaffs new at Balephuil including a ‘Siberian’ CHIFFCHAFF and a LESSER WHITETHROAT was at Meningie (John Bowler).

ISLAY: The HOOPOE is still being seen in the Bridgend area.
TIREE: Still at least 7 YELLOW-BROWED WARBLERS on the island today.

ISLAY: At least 7 YELLOW-BROWED WARBLERS were found on The Oa today (RSPB per Islaybirdblog).

ISLAY: A YELLOW-BROWED WARBLER was seen today on The Oa during a circular walk (Nick Rentmore).

TIREE: At least 8 YELLOW-BROWED WARBLERS this morning when only two gardens checked – 5 at Balephuil (John Bowler) and 3 at the Glebe (Jim Dickson).

TIREE: A YELLOW-BROWED WARBLER was new today at Balephuil (John Bowler). The 1cy female RING-NECKED DUCK is still at Loch a’ Phuill.

TIREE: A 1cy female RING-NECKED DUCK was new in at Loch a’ Phuill today (John Bowler).

TIREE: A YELLOW-BROWED WARBLER this morning at Heylipol (Jim Dickson).
COLONSAY: A 1cy SURF SCOTER found at Kiloran Bay today by David Jardine is a new species for Colonsay/Oronsay.

LITTLE EGRETS – an update on numbers – at least 7 at the Holy Loch and 2 at head of Loch Riddon Cowal today. Have been 4 at West Loch Tarbert Kintyre recently and another 2 at Loch Laich North Argyll. These are record numbers for Argyll – please let us know if you see any others at this time – many thanks.
TIREE: The YELLOW-BELLIED FLYCATCHER appears to have been last seen on 19th Sep. Here are some more photos just received:

TIREE: News broke late on Tues 15th Sept of a YELLOW-BELLIED FLYCATCHER (Empidonax flaviventris) in a garden at Balephuil – found by John Bowler. This is the first ever record of this species in Britain & the Western Palearctic. Initial fears of a mega twitch were allayed due to reduced numbers of available places on ferries and planes and allowed careful management of viewing to be organised along Covid-19 guidelines for social distancing. Up to 80 birders arrived Wed- Fri and all were well behaved and no stress was caused to the bird which regularly posed well within 2 metres of the many photographers! Around £1,000+ has been collected for some Tiree covid related projects – BACS transfers can be made to the Just Giving Link is below https://www.justgiving.com/crowdfunding/ybflycatchertiree
MULL: A juvenile Turtle Dove was at Caliach on 16 Sep (Ewan Miles, Iolo Williams) and this or another was at Arinagour COLL on 17 Sep (David Jardine) – also a Lapland Bunting on Coll on 18 Sep (David Jardine).

ISLAY: The GLOSSY IBIS is still present in a barley field on the road leading to Craigens – seen by several of the Islay bird folk and photos taken by Peter Roberts.

TIREE: A LESSER WHITETHROAT was at Balephuil today – also 15 Common Redpolls (John Bowler).
ISLAY: A GLOSSY IBIS was found this evening near Craigens by Nicholas Radcliffe and ID confirmed by his son Alex Radcliffe.

ISLAY: An adult ROSY STARLING today in central Bowmore – garden to rear of Vets (Samara Johnson) – presumably the same bird that was there earlier in the summer?
MID-ARGYLL: A report of a possible SEMIPALMATED SANDPIPER with Dunlin at Loch na Cille (Allan Russell).
COLONSAY: A report of 2 juvenile SEMIPALMATED SANDPIPERS at Kiloran Bay yesterday 7th Sept (David Jardine).

KINTYRE: A ROSEATE TERN was seen and heard at the Machrihanish SBO by Eddie Maguire and other observers this am. First report of one there for several years.
ISLAY: The adult BONAPARTE’S GULL was seen again at Loch Gruinart this am – also a LAPLAND BUNTING and 2 CURLEW SANDPIPERS there (Jim Dickson).
TIREE: A LAPLAND BUNTING at Gott Bay (Keith Gillon).

TIREE: A Green Sandpiper flew across the road at Cornaigmore, 1 Sooty Shearwater and 1 Storm Petrel off Hynish (Keith Gillon).

ISLAY: A seawatch off Frenchman’s Rocks this am produced an adult WHITE-BILLED DIVER and a juv SABINE’S GULL (John Sweeney). The adult BONAPARTE’S GULL is still at Loch Gruinart and 2 juv CURLEW SANDPIPERS also there (Jim Dickson).

ISLAY: An adult BONAPARTE’S GULL was found at Loch Gruinart this evening (James How), A juv CURLEW SANDPIPER was on the sands at Loch Indaal and a GREEN SANDPIPER was flushed from a burn at Craigens (Jim Dickson).

MULL: The adult male TWO-BARRED CROSSBILL still at Ardrioch, Dervaig this morning (David Jardine).
TIREE: A first-year PIED FLYCATCHER at Balephuil today – the third there this autumn (John Bowler).
MID-ARGYLL: The GREAT EGRET is still at the head of Loch Fyne (Simon Morton).