North-Argyll is one of the least known areas of the country. It stretches from the dramatic scenery of Ranoch Mohr in the North, to the beautiful Argyll coastline, to the interior rugged mountains and narrow glens around Ben More and Ben Lui. It is an area where water and mountains, wide open vistas and peaceful solitude weave a spell of the wild.

Bird species you may see include White-tailed Sea Eagle, Golden Eagle, Hen Harriers, Pied Flycatchers, Goldeneye and Divers to name but a few. Its high mountains still provide suitable habitat for the Ptarmigan and Snow Bunting and its moors a home for Black Grouse.

Although only a few roads cross North Argyll, the area is a heaven for walkers. From gentle walks along the coast or along the old drovers road at Inveroran, to the more challenging hill walks. Each of them offer good wildlife and bird life viewing and an excellent way to explore this unknown part of Argyll!

Habitat: Promontory at the mouth of Loch Etive and the broad sandy bay N from here. 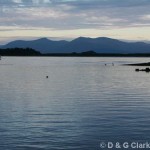